What do you do on a typical evening in San Pedro today? You watch some television program or you may go over to Mr. C's Sports Bar to watch some sports and play in the company of other friends. Perhaps you take your fiancé to a discotheque or out to a romantic dinner at your favorite restaurant. There are those who lock themselves at Cholo's or Marino's, or Compadre's or any of the popular bars and drink or play pool. There are innumerable options, some of which I am not even aware of, not to mention going to illegal places to do the illegalities. And just exactly what did the folks do in the 1950's of the past millennium? As we cruise through this episode, just remember that there were no telephones, no television, no electricity, no discotheques, etc. in the 1950's nor 1960's. Video cassette players arrived on the island in the late 1970's and television by way of cable did not commence until 1982.

There was one old custom that may seem strange to you, but it was a very popular pastime and custom then. It was the custom of walking around the village. Yes, walking! Simply walking. How much? As much as 10 to 15 rounds around the village, which extended from the Primary School to about Milo's Store area. The cemetery was just on the outside of the village.

Mostly the boys would walk around in groups of 3 or 4. This, as you can imagine, gave them the chance to pass by their girlfriends' house and seeing them. Girls only walked on Sundays. Those boys who were bold or had some confidence with the girl or her parents would stop to chat with the girl. She was on the verandah and the boy was on the street. When you would see a boy stop and go up on the verandah for half an hour or so, that meant he was "in business". He was accepted as the official boyfriend of their daughter. Eventually he would ask permission to visit at the house from 7 p.m. to 9 p.m. and during that courting period, he would not walk the streets. The rest of the friends just kept strolling, conversing, laughing etc. as they walked round and round the village streets every night. When the young men went out fishing for a ten-day period, then the streets were deserted.

During that period when the boys were strolling about, they would buy "pepitoes", (roasted pumpkin seeds) chewing gum, or some other junk food. At times they would stop by a girl's home and offer a chewing gum. It was not really a treat, but a kind gesture. "Una chiquilla loca" (a flirty girl) would ask a young man to buy some pepitoes for her, just for an excuse to talk to the young man. And he did, and both were happy.

Now on Sundays, the girls also came out in groups to walk around the village. Sunday was the only day they would come out to socialize so they would dress up in their "Sunday best", as we would call it. They were well dressed, as if to go to a dance. Their walk would start about 6 p.m. or sunset. Somehow they managed to fix up the right group- 3 or 4 girls who all liked another 3 or 4 boys in another group. And somehow they managed to always walk in the opposite direction so that they would meet the opposite sex down the street at every round. Eventually they boys would cross over to the girls' group and the courtship and the stroll about the town continued. The more flirty girls would go to the beach or the main pier, but believe me, that was rare.

So what do you think? Do you think walking around the village was fun? That is how many young men met their girlfriends and are happily married now for over thirty years. You can see that this tradition of walking around the village was not just for the heck of walking. It had its purpose. You could not do that today, as you could not walk casually down the streets without some frenzied driver honking at you. So what do you do? You hang out by Barrier Reef Drive and meet the girls there. It's a new custom of Temptation Island. 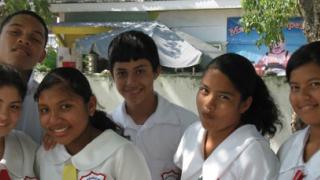 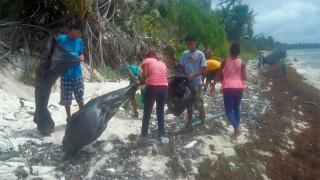 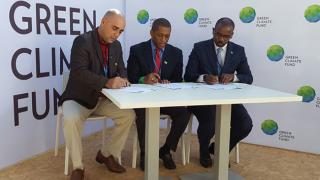