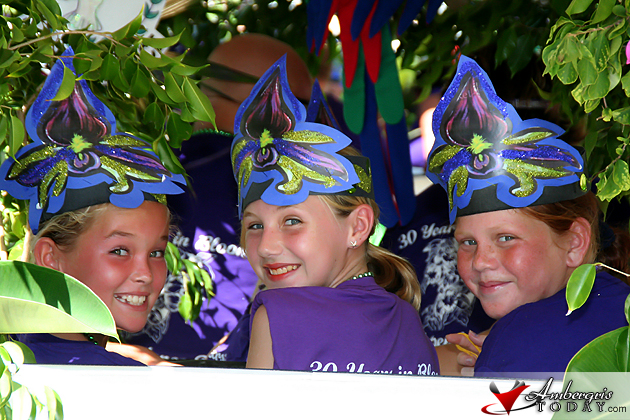 While I was going through the 1000 plus pictures of the San Pedro Independence Day Parade I was totally taken aback by the amazing costumes in this year’s floats. I did not have time to notice when I was taking pictures and winding amongst all the parade revelers; I guess I was too busy trying to capture the energy and spirit of the people. But after taking a much closer look at the pictures I have to give props and credit to all the participants of the parade and to those who designed and created the costumes.

So I would like to give my two cents on the parade and the judging of the floats. To my understanding the San Pedro Town Council assigns various and random individuals around town to judge the parade as they pass in front of their homes. They are given a sheet with the various groups and criteria to judge them by. There are 1st, 2nd and 3rd prizes in two categories – Best Float and Best Organized Group.

The idea is good, but there might be a better way to do this so that more floats/groups get a better share of the prizes. For some time now the same groups win multiple prizes when there are others that are equally well-deserving. I believe that the method of judging is overlooking the fabulous costumes and detailed decorations on the floats that are hard to notice from one’s verandah.

Take a look at the judging done at Belize City’s Carnival. A day before the parade, participants dance, sing and present their costumes to a panel of judges who are able to see the details and hard work put on the expensive costumes and can also be enlightened on the meaning of the costumes and what they represent.

Fact: Did you know that there were 30 hearts painted on the faces of the baton girls of Isla Bonita Elementary? The represented the 30 years of Belize’s Independence? 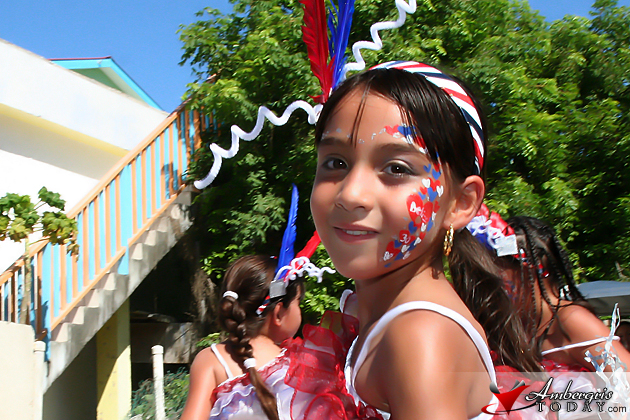 Fact: Did you know that the students of St. Peters Elementary and San Pedro High School wore black ribbons on their chest in respect to the passing away of Hon. George Price? 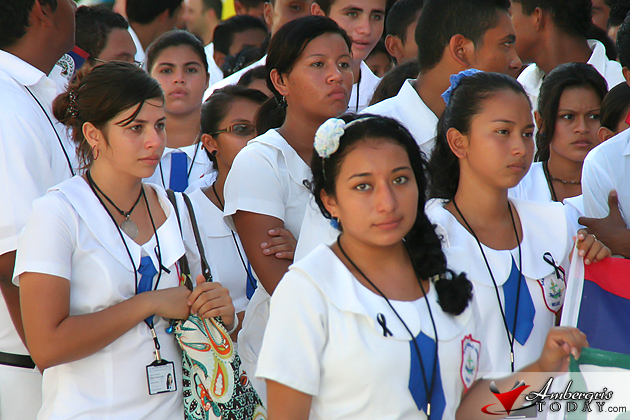 Observation: Did you notice that the Island Academy represented the Black Orchid (National Flower of Belize) with intricate headpieces depicting the flower? 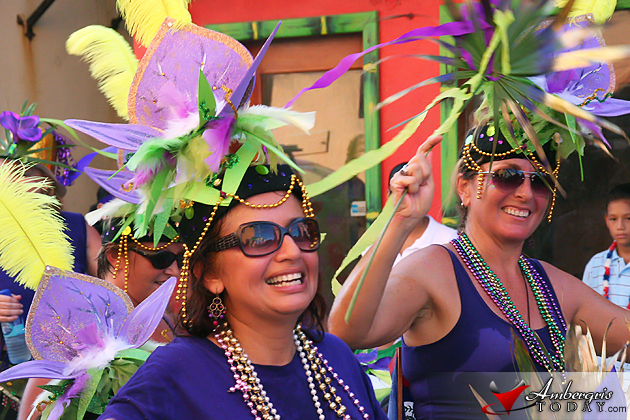 Fact: Did you notice the dove and the #30 on the headpieces of the Isla Bonita Elementary group? It made reference to “Peace” in the theme of this year’s parade ("Honoring Our History, Celebrating Our Cultures, Uniting For Peace.) 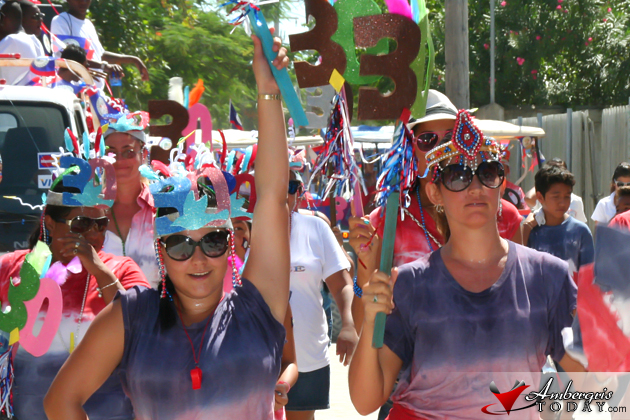 Observation: Did you notice the feathers, beads and all the glitter on the headpieces of ABC Pre School as they honored the Blue Morpho Butterfly of Belize? 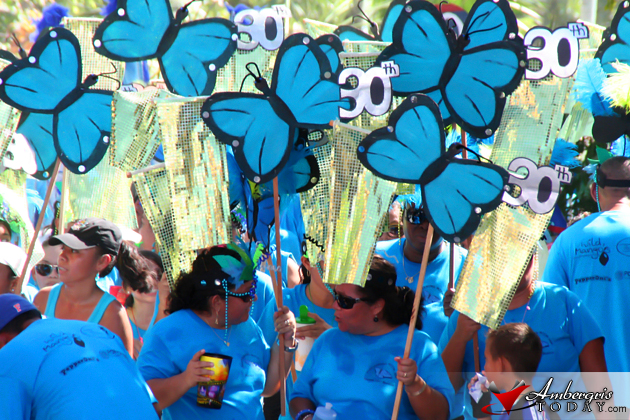 Observation: Don’t know the name of this group (below), but look at the great color, beads, feathers and work that went into creating such great costumes! This was one of my favorites. 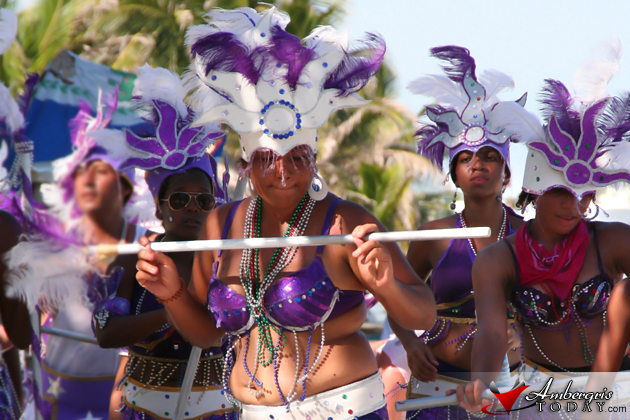 Fact: Did you know that the Marina’s Store float had eggs, chickens, banana trees, a lobster trap, fishing nets and a full kitchen with a Mestizo girl kneading corn meal? The float represented the diverse cultures of Belize under an old thatch house. 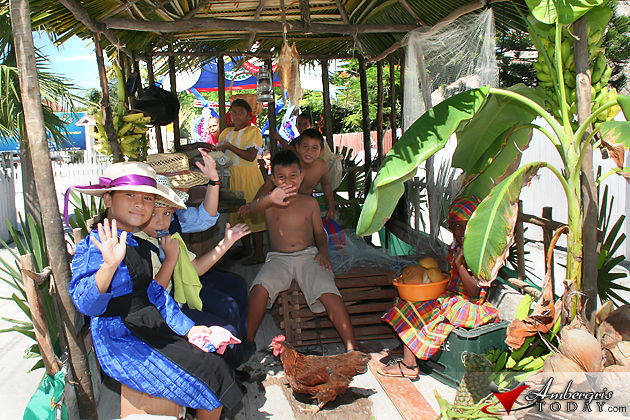 Observation: Did you listen to the songs and messages from the Shalom church float? The music was great! 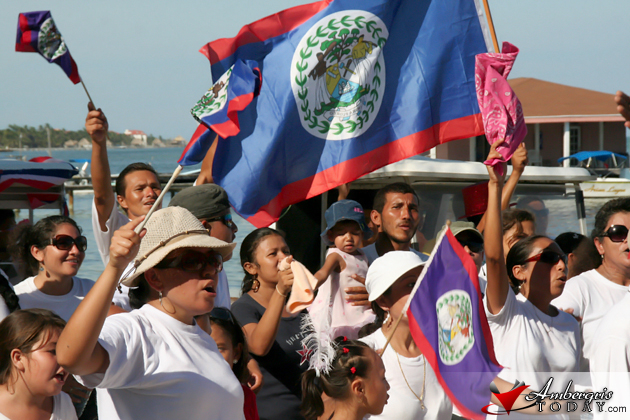 I read on Facebook how one mother of the Island Academy broke her glue gun making her headpiece and desperately looking for a replacement. This made me smile to see the dedication and time people put into making their parade float so incredible. Oh and thumbs up to Dixie Bowen and her crew of Bowen and Bowen Distributors. They gave away crates, upon crates of free Belikin Beer, Coca Cola and Crystal Water throughout the entire 3-hour parade, non-stop, not to their group but to the bystanders of the parade. They were spreading the cheer! :) 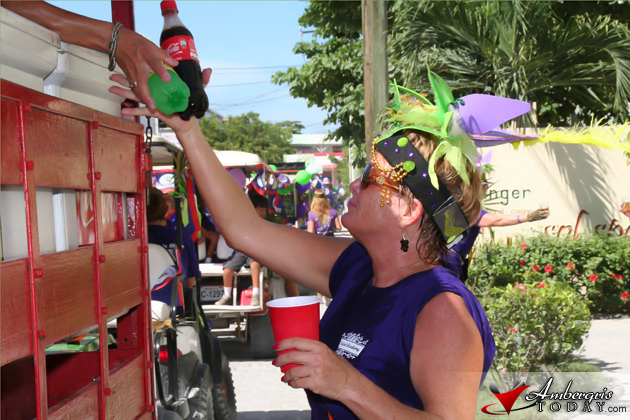 So you see, if the parade judges get to see all these amazing details that usually go overlooked from way above the parade, more floats or groups would get rewarded for their hard work, as I think that it should be. Why not have all the floats on display in front of the judges just before the parade starts. Let them see what they are all about; what they represent. We don’t need to do a showing the night before like in the City, just have them display their work so the judges can take a closer look.

I love the San Pedro Parade and have so much fun documenting it with pictures and video for Ambergris Today. This is not a criticism but rather a positive critique and making a suggestion that the Town Council or the September Celebrations Committee can look into. Congratulations to all of the winners and participants this year! 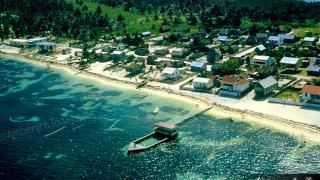 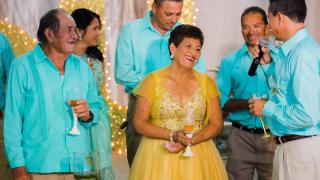 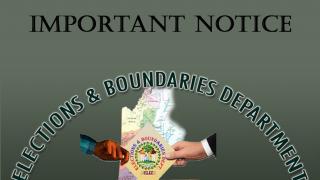 Impersonation of Staff at the Elections and Boundaries Department