Fire-fighters from across the country gathered at the People’s Stadium in Orange Walk on Friday, July 16, and Saturday, July 17, for the annual Fire-fighters Olympiad. The Olympiad which started out about 16 years ago displays the men’s fire fighting skills in various competitions. And this year the San Pedro Fire Department came in 2nd place and brought home a total of 13 trophies.

A total of ten teams participated in the competition, and fire fighters are required to perform ten different fire drills and an additional 5K marathon. Each drill was timed and the competitors with the least amount of time won. The overall time each team took to complete all ten drills was tabulated and the team with the shortest time won.

The San Pedro Fire Department would like to thank all the businesses and friends that helped financially. The San Pedro Team practiced for about four months to prepare for the National Olympiad and will continue working arduously to improve their fire fighting skills.

“Every year the volunteers look forward to the being at the Olympiad. It is one of the main events for the volunteers,” commented Michael Middleton, Olympiad Coordinator to Love FM. “Each of them works hard to become a part of their team in their districts. This actually helps in the actual fire fighting where volunteers are there and they know exactly what to do when performing fire fighting.” 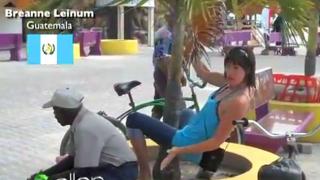