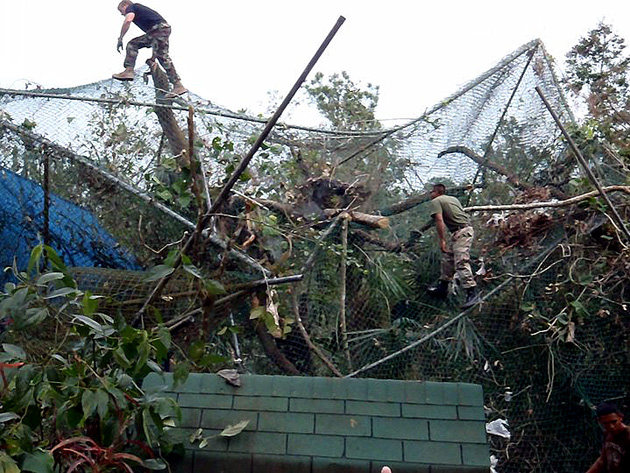 An Urgent Appeal for help!
Did you know that the Belize Zoo is closed? That’s what a post says on their website’s home page! “Closed until further notice, rebuilding after Hurricane Richard.” The Best Little Zoo in the World” needs help!! On October 24th, 2010, The Belize Zoo and Tropical Education Center sustained a direct hit from Hurricane Richard and its rustic setting of wire fences and abundant forest were no match for Richard’s raging winds. Once again, American Sharon Matola, the director of The Belize Zoo (TBZ) and main character in the popular book The Last Flight of the Scarlet Macaw: One Woman’s Fight to Save the World’s Most Beautiful Bird, by Bruce Barcott, is dealing with a huge challenge, the greatest challenge TBZ has ever faced, a devastating blow from the hurricane.

Matola, who has lived in Belize for more than 25 years and has dual citizenship, reports, “Hurricane Richard did a number on the Zoo. We are closed for repairs and renovations and probably will not be able to re?open until December. Thankfully, none of the animals were injured or escaped, but our facility has been hit hard.”

In the midst of unraveling the tangle of broken vegetation left by Hurricane Richard, Zoo officials are concerned about the additional stress from snarling chain saws and clattering hammers on some of their favorite tenants. The animals survived the hurricane in small shelters in each enclosure, which then became their homes while the staff raced to clear the debris and repair the fences. The damage done to many of the animal exhibits is overwhelming, but the pace at rebuilding those habitats is impressive.

Logs cut from the debris are being salvaged to add structure and the remaining vegetation is being cultivated to regenerate more shade in the enclosures.

From the Rubble, an Opportunity
“The zoo is what we call a disaster state right now. We are working really hard every day to see that we will be open on the 1st of December. And it’s not going to look like this; it’s going to be a new and dynamic zoo,” says Matola.

Hurricane Richard’s visit was a sobering event at the Zoo. This was only a “Category 1” hurricane and Belize can expect more intense hurricanes down the road. Matola continues, “As we begin renovations, we are rebuilding with the knowledge that our infrastructure may one day be in the path of a “Category 3, 4, or 5” hurricane. We will make certain that all animals are safe and enclosures can withstand the brunt of a fierce hurricane. The Belize Zoo will re?open on the 1st of December, however, construction and renovations for the upgrading of the facilities will continue throughout the months ahead.”

The work is underway and the bills are mounting. After a couple challenging years due to the global recession, “The Belize Zoo does not have the financial resources necessary to see these plans and upgrades realized. We have been working daily in an effort to raise funds so that work can continue to progress, but it is a huge challenge,” says Matola.

Urgent Need for Donations
Hurricane Richard leveled most of the vegetation at The Belize Zoo, downed trees choking pathways among the animal exhibits, flattening wooden decks, platforms, and crushing steel fencing surrounding the animal exhibits. The plumbing system providing water and drainage for the exhibits and the electric fences were damaged. In normal times the Zoo struggles to balance its budget with the food for the animals and staff salaries literally depending on gate receipts. But right now, the added expense of repairs, combined with the closing of the Zoo, the financial challenge at The Belize Zoo has never been greater. The greatest needs are truckloads of strong and durable fencing, cement, gravel and large rocks, PVC piping, steel pipe, lumber, wire, nails, and paint, as well as new tools, new water pumps and money to pay workers. People can help by going to www.belizezoo.org to donate.

“Hurricane Richard may have set back our progress in raising awareness about the special natural resources in this nation, but we are determined to go forward with good planning and enthusiasm. Our conservation programs are effective and bring forward an important understanding about the biodiversity still thriving in this little nation. The Belize Zoo will definitely still be worthy of being known as the best little zoo in the world. Assistance to see that our mission continues to soar is deeply appreciated,” said Matola.

About The Belize Zoo
The Belize Zoo and Tropical Education Center, located 29 miles west of Belize City on 29 acres (12 ha) of tropical savanna, was founded in 1983 by Sharon Matola as a last ditch effort to provide a home for a collection of wild animals which had been used in making documentary films about tropical forests. It is home to more than 125 animals of about 48 species, all native to Belize, which were orphaned, born at the zoo, rehabilitated, or sent to The Belize Zoo as gifts from other zoological institutions.

Visitors walk gravel trails through the natural vegetation to view the animal exhibits created within the native habitat which provide an unusually intimate view of the Belize Zoo’s animals. The Belize Zoo is a popular destination for tourists staying at the dozens of resorts around the country and visiting on cruise ships. Visitors are treated to close encounters with two trained jaguars, “Junior Buddy,” star in a new book from Scholastic Press, and “Field Master” who rolls over and does high?fives for visitors. Over 30,000 non?Belizeans visit the Zoo each year (top countries: USA, Canada, UK, and Germany).

Shortly after the backyard “zoo” began, Sharon quickly realized that its Belizean visitors were unfamiliar with the different species of wildlife which shared their country. Thus, The Belize Zoo and Tropical Education Center’s mission is to inspire Belizeans to conserve and protect natural habitats that sustain Belize’s biodiversity by bringing visitors closer to the animals of Belize.

Over 50,000 Belizeans, including 18,000 school children, visit The Belize Zoo each year, and the Education Department has extensive out?reach and on?site education programs for students and teachers. They have a “Protect the Predators” Billboard and poster campaign on behalf of the Jaguar and Harpy Eagle, as well as a Belize Harpy Eagle Restoration Program and a Problem Jaguar Rehabilitation Program. It has organized or participated in a number of intensive biodiversity surveys in the far reaches of the Maya Mountains of Belize. (Pictures courtesy of The Belize Zoo) 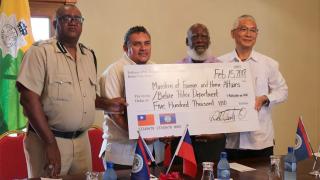 The Republic of China Taiwan Grants US$500,000 to Belize as part of the Security Cooperation 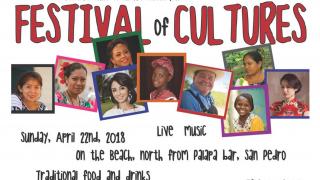 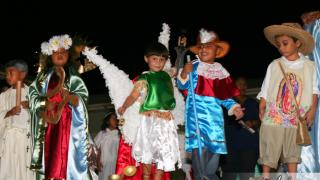