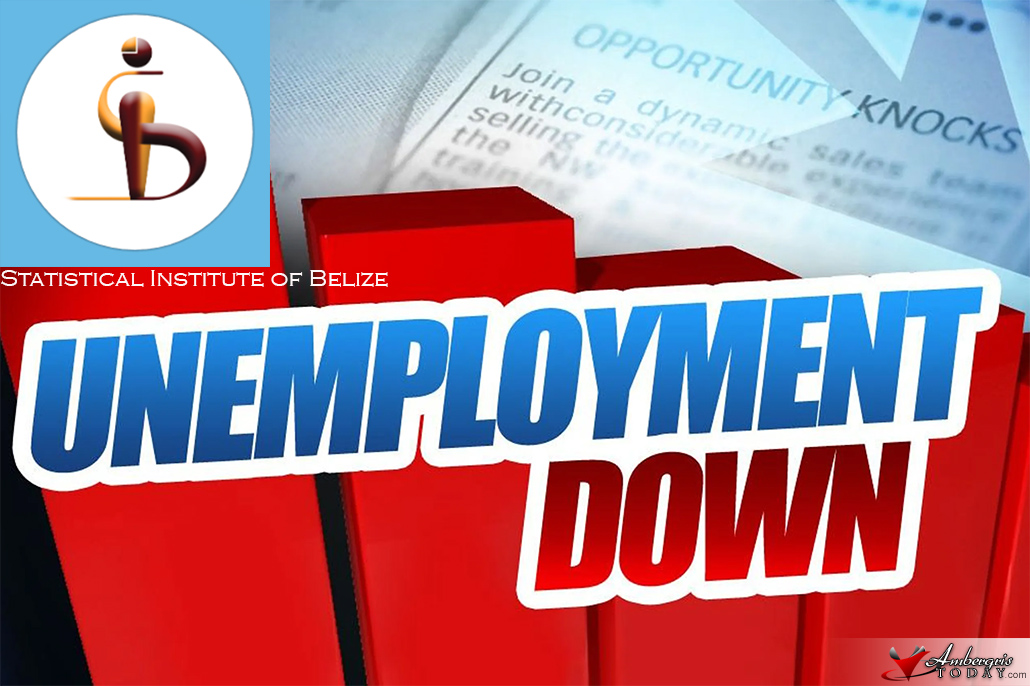 Preliminary  results  from  the  Statistical  Institute  of  Belize’s  April  2019  Labour  Force  Survey  show that the unemployment rate in the country decreased from 9.4 percent in April 2018 to 7.6 percent a year later. This has been the lowest rate ever recorded and resulted from a net increase of 8,478 in the number of persons with jobs coupled with a number of persons exiting the labour force.  Overall,  the  Belize  District  experienced  the  highest  gains  in  employment,  while the Cayo District saw persons – most of whom were females – leaving the labour force, resulting in a fall in the national unemployment rate.

Labour Force:  Approximately 177,915 persons were estimated to be in the labour force in April 2019 (See Figure 1). A net increase of 5,829 persons was observed, of which 73 percent or about 4,231 were males. This was in contrast to what was seen last year, when there was a large influx of women into the labour force. Notwithstanding this increase in the number of persons in the labour force, the Cayo district registered a net decline of 1,300 persons.

About two-thirds of the working age population were a part of the labor force, either holding jobs or available for employment. However, women remained far less likely to be a part of the labour force, with a participation rate of 53 percent, compared to almost 80 percent among   males. For both males and females, participation was highest in persons aged 35 to 44 years, and lowest in the 14 to 24 years age group. 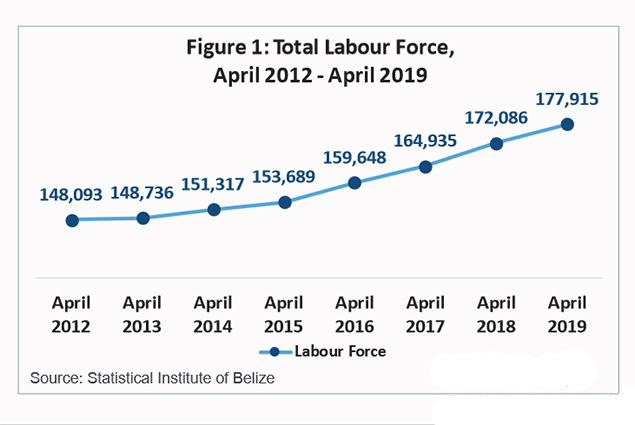 About 26 percent of all employed persons held jobs that were classified as ‘Services and Sales Workers’, followed by 22.7 percent who worked in ‘Elementary Occupations’ (see Figure 2). In general, men were seen to be more actively employed in the latter category, with almost a quarter of males holding jobs classified as ‘Elementary Occupations’, while more than 37 percent of females were employed as ‘Services and Sales Workers’. Across the districts, Belize  registered  the  largest  gains  in  employment,  largely  due  to  over  4,300  more  jobs  in  ‘Services and Sales’.

Among the industries, the three biggest employers were ‘Agriculture and Related Activities’, ‘Wholesale and Retail Trade and Repairs’, and ‘Tourism’.  These three categories combined accounted for almost a half of all jobs in the country, with each providing jobs to just under 16 percent of the employed labour force. 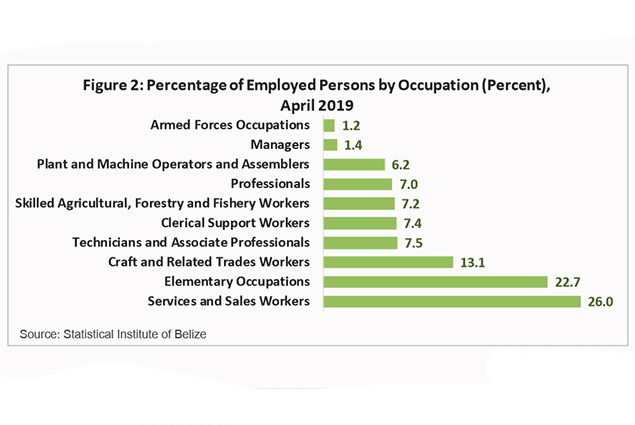 Unemployment: Overall, the level of joblessness in the country went down by 1.8 percentage points in the twelve months since April 2018 (see Figure 3). While unemployment among females decreased by  almost  4  percentage  points  from  14.9  percent  to  11  percent  between April 2018 and April 2019, females continued to be twice as likely  to  be  unemployed  as  males.  The unemployment level among males also fell, although at a much smaller margin, from 5.6 percent in April 2018 to 5.3 percent in April 2019.

For  the  month  of  April  2019,  the  unemployed  population  was  estimated  at  13,486  persons,  a  decrease  of  about  2,650  persons  from April 2018.  Across the districts, except for Corozal and Orange Walk, unemployment rates were down, with the largest decline being observed in the Cayo District, where the rate of joblessness fell from 13.6 percent in April 2018 to 9.8 percent in April 2019. This fall was attributed primarily to almost 1,300 persons dropping out of the labour force. Nonetheless, despite having the largest drop in the level of unemployment, particularly in rural areas, this district still registered the highest unemployment rate in April 2019 (see Figure 1). The Belize District also experienced a decline in the level of unemployment, from 8.5 percent to 6.8 percent, over the year. However, unlike Cayo, this district saw a net increase of about 7,200 employed persons, resulting in depressed unemployment rates for the period. Stann Creek District also  had  a  net  increase  of  about  1,138  employed  persons,  further  contributing  to  the  decrease  in  national  unemployment.  Overall,  unemployment  levels  in  urban  areas  were  slightly  higher  when  compared to rural areas. 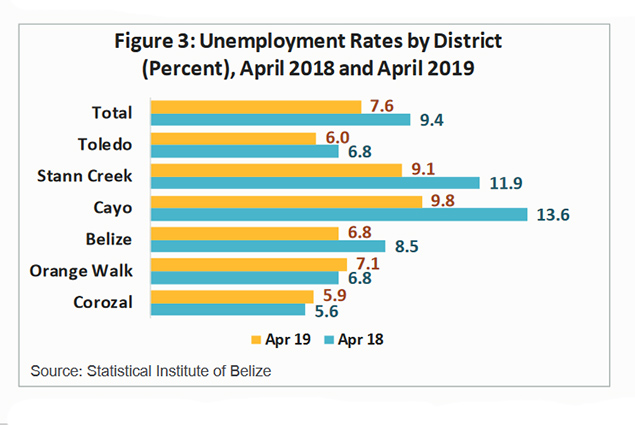 Underemployed:  In April 2019, an estimated 25,248 persons were underemployed, holding jobs but working less than 35 hours per week. This total represented about 15.4 percent of all employed persons and is about twice as many as the number of unemployed. Between the sexes, women continue to be significantly more likely to be underemployed compared to their male counterparts.  Of the 100,822 males with jobs, 11,227 or 11.1 percent were underemployed, while of the 63,607 females that were employed, 14,021 or 22 percent fell into the underemployed category. 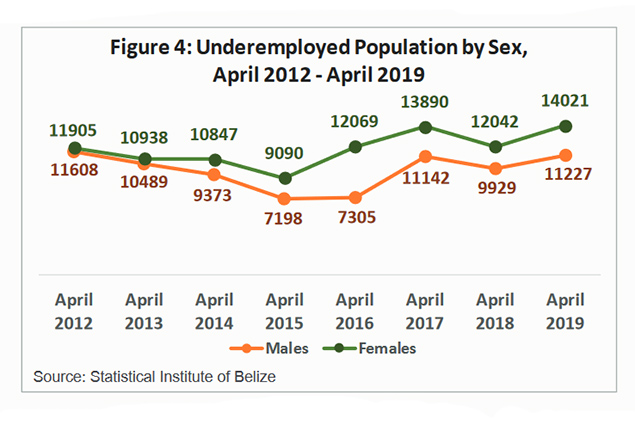 Persons  not  in  the  Labour  Force: Persons  Not  in  the Labour Force (PNLF), those who were not working and were not available for work, made up about 33.8 percent (90,948 persons) of working age persons in Belize as of April 2019.  This was a marginal net  growth  of  504  persons  from  April  2018  to  April  2019,  as  1,563  females joined this group while 1,058 males moved from this group into the labour force. Cayo District saw the greatest increase in PNLF, with the number of persons not participating in the labour force rising by 2,959 persons, while the Belize District saw its PNLF drop by 4,373 persons. 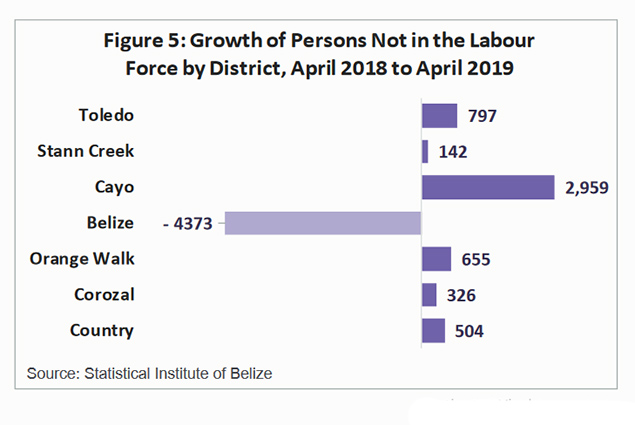 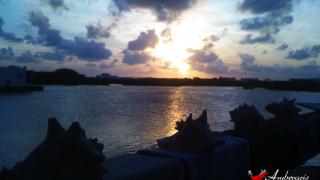 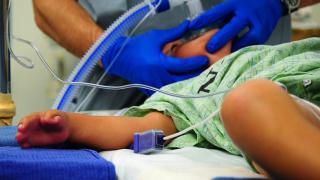 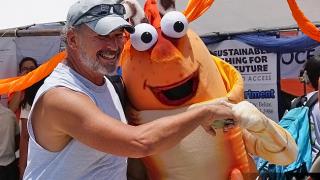